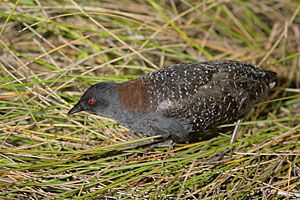 Notes by Meghan Anne: If you are so lucky as to get a glimpse of a Black Rail, you can expect a mostly dark rail with a chestnut nape, white spots on the back, and bright red eyes. It's extremely secretive nature is helped by its size, it is the smallest rail in North America, just 4-6 inches long. Be cautious relying simply on size and dark coloring in your ID, all young rails are black and are similar in size to an adult Black Rail. An easier way to identify them is by their call, given late at night, a piping "ki-ki-doo", with the last note lower in pitch.

This rail lives along the coast in tidal marshes with dense grass and shallow water, and grassy marshes inland. While there is some variation, many guides agree that they winter on the upper half of the Texas coast with a significant portion where they are residents. Other resident populations are found in California and the southeast US. According to sightings on eBird, they may be found at Bolivar Flats Shorebird Sanctuary, the area between High Island and Rollover Pass, and the Anahuac National Wildlife Refuge.

This bird is difficult to flush and is not often seen in flight. It instead scurries through the marsh as it feeds on insects, snails and seeds. Their secretive nature makes them a difficult study. While populations are hard to estimate, they are believed to be declining in some areas due to habitat loss, causing them to be listed as Near Threatened. They nest in high parts of the marsh in a woven cup of plant material, often with a dome on top. Many details of nesting behavior and chick development are not well known. The Black Rail is an exciting example of all that is still yet undiscovered in our study of birds.

Profile by Bryce Loschen: Black Rails are the smallest of the North American rails, about the size of a sparrow, and very secretive. Black Rails are tiny and all dark with gray heads, a rufous nape, and white speckling on their back. Their call is a three note “kickee-doo” primarily given at night.

Black Rails are found in coastal marshes around upper limits of highest tides and in grassy freshwater marshes. They favor very shallow water, or damp soil with scattered puddles. Black Rails eat a variety of small invertebrates and seeds. Their foraging behavior is not well studied, but they seem to feed mostly during the day. During breeding Black Rails build nests a couple of inches above ground or shallow water in a clump of vegetation. Nests are a cup of marsh plant material, usually with a domed top woven over it.

Black Rails have a broad distribution, inhabiting tidal marshes and freshwater wetlands throughout North and South America. The rails in the Eastern United States are partially migratory leaving northern areas to winter along the Gulf and Florida coasts. Because of their elusive nature, it is hard to estimate Black Rail populations, but numbers appear to be declining throughout much of their North American range. The main threat is loss of wetland habitat.

On October 5, 2018, the US Fish and Wildlife Service recommended that the eastern subspecies of Black Rail, birds east of the Rockies, be listed as Threatened. This increased attention will hopefully spur the science and conservation needed to reverse the population decline.

Black Rails are notoriously difficult to find, but they are residents on the upper Texas coast year round. Your best chance to encounter a Black Rail is in the spring when they vocalize. The Bolivar Peninsula and coastal National Wildlife Refuges are good places to listen. 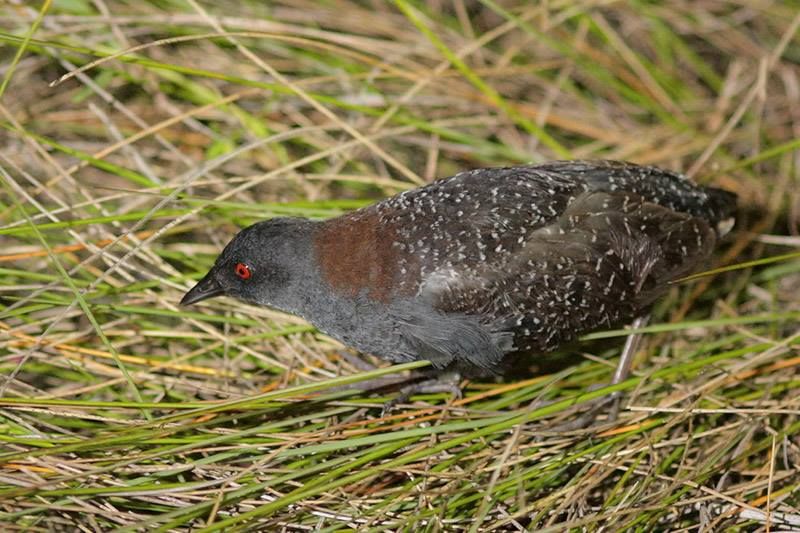