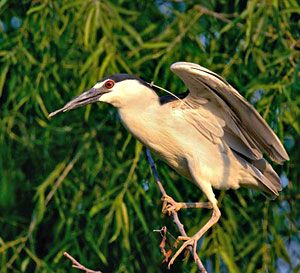 Seasonal Occurrence:  Abundant in all seasons. Breeds in our area.

Profile by Azure Bevington:  Black-crowned Night-Herons are small, stocky herons with short legs and necks. The adults are light gray with a distinct black back and crown, the face and underside are lighter yellowish white with an all-black bill and striking red iris. They also have long narrow white head plumes which can be difficult to see in flight. They are a cosmopolitan species, occurring worldwide, mostly in warmer climes. The Black-crowned Night-Heron can be found during the spring/summer breeding season throughout North America, from Mexico to central Canada. They spend the winter in coastal areas of the southern U.S. and further south throughout the tropics.

As their name suggest they are most active at night, but can also be seen during the day perched on tree limbs or in tall grass. They forage in wetlands and on land, searching out small aquatic and terrestrial animals; they are opportunistic feeders and will also consume plant material, carrion, and human refuse. Black-crowned Night-Herons tend to forage alone, but will roost and nest in groups, primarily in trees or tall marsh grass over water. They lay 3-5 eggs in twig nests built by both parents. The chicks leave the nest after about a month, but don’t learn to fly until 6 weeks, foraging on the ground in small groups in the meantime.

They can often be seen flying over Claybottom Pond at the Houston Audubon Smith Oaks Rookery just before sunset, making their distinctive squawking “kwok” call. It was this Raven-like call, shorter utilitarian and raven-like bill, that likely inspired its scientific name, Nycticorax nycticorax, which means night raven.

Keep an eye (and an ear) out around sunset next time you’re near a local wetland, and you may catch a glimpse or call of a Black-crowned Night-Heron. 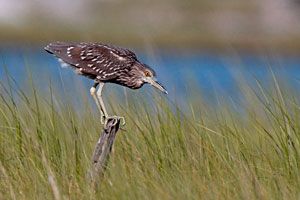 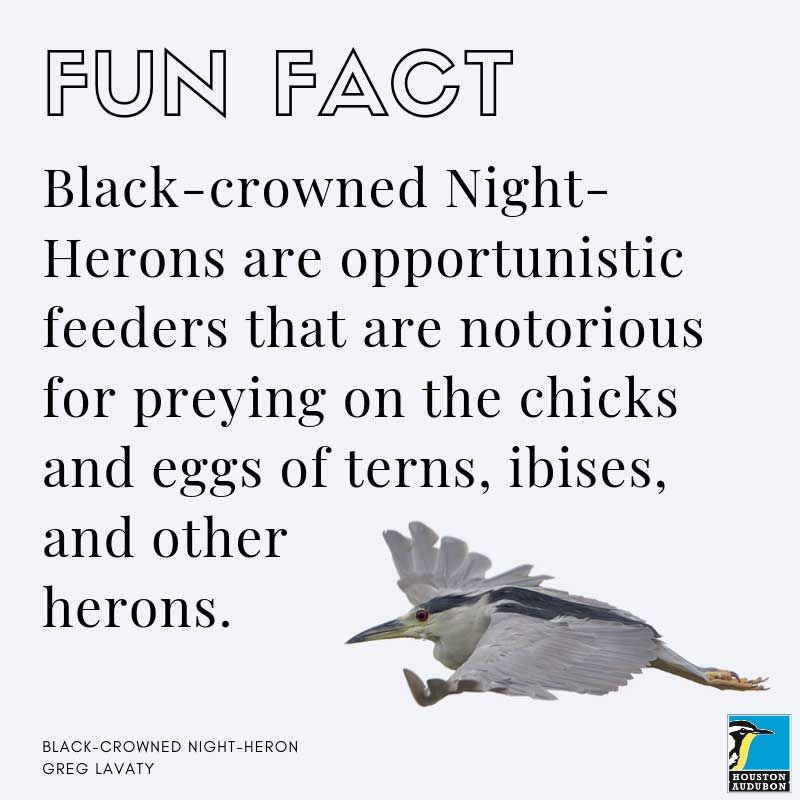