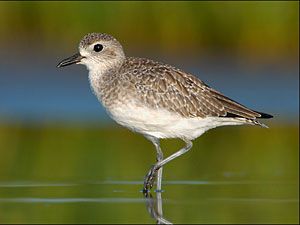 Notes: The Black-bellied Plover is the largest plover in North America. It breeds in the Arctic tundra and winters along coastal mudflats and beaches in the United States, Central America, and the Caribbean.

Like other plovers, they have large round heads and prominent dark eyes. They can be distinguished at a distance by their large size (11.5 inches in length), long legs, and stout bill. In non-breeding plumage, these stocky shorebirds are quite plain with a mottled tan and gray back, a streaked breast, and a white belly. Their plumage changes drastically during the breeding season, when they exhibit their namesake solid black face, breast, and belly, along with stark white stripes on either side of their pale head. Females are similar to males but tend to be less vividly colored. All plumages exhibit a black armpit and whitish tail, which distinguish them from the similar looking, but slightly smaller American and Pacific Golden Plovers.

They can be seen roosting in groups or feeding singly, pecking at the ground and then traveling a few steps before pecking again. When wintering along the coast Black-bellied Plovers eat mainly molluscs, crustaceans, and marine worms that they pull from shallow mudflats at low tide. During summer breeding season in the Arctic tundra, they eat mainly insects and some plant material. 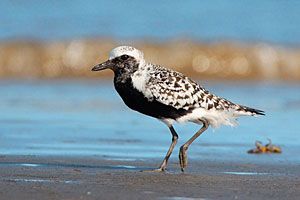