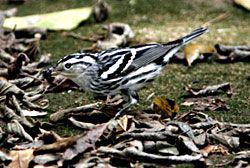 Profile by Glenn Olsen: The Black-and-white Warbler is not as brightly colored as many other warblers, but the contrast of the black and white makes it distinctive and attractive. At first glance, the color pattern may bring to mind the similarly attractive Blackpoll Warbler. However, upon closer observation, the plumage pattern is quite different, with the male Blackpoll having a solid black crown and prominent white cheek compared to the male Black-and-white’s striped head and crown and dark cheek. Overall, the body of the Black-and-white actually looks striped. A behavioral clue that really points to a Black-and-white is the rapid, constant movements and nuthatch-like clinging to the tree limbs; this is unlike other warblers. As a general rule, warblers are active, but the Black-and-white is a warbler in overdrive! It hops, flits, turns, and bounces around as it works its way up, over, and under tree limbs, tree trunks and on to other trees. It is in constant motion in search of insects and their eggs. A Blackpoll’s movement is sluggish in comparison.

Black-and-whites are an early migrant; they begin to arrive in noticeable numbers in mid-March and are abundant until mid-May. In the fall we see them most frequently from mid-August to mid-October. We even occasionally have a few overwinter on the Gulf Coast. Their breeding grounds include most of Canada and the eastern half of the U.S., including areas of east Texas. This little bundle of energy is a real joy to observe. I encourage you to take a walk in your neighborhood, a local park or a trip to a Houston Audubon sanctuary to find one of these little warblers as they come streaking through in migration.

Comments by Don Verser: Black-and-white Warblers are very early fall migrants and have been observed on the coast as early as the last week of June. By mid July they are very common. Occasionally overwinters. This is perhaps the only warbler that can be observed near the coast every month of the year. Often gives a thin zeet call in flight.

Profile: The Black-and-white Warbler is a medium-sized warbler with a long, slightly downcurved bill. They are boldly striped in black and white and their black wings have two wide, white wing bars. The males of this species have more pronounced black streaking on their underparts and cheeks. Females and immatures are paler, have less streaking and large black spots on their undertail coverts. They can easily be identified by their call which resembles a squeaky wheel. It is a high-pitched, monotonous weesy-weesy-weesy-weesy.

In the summer the Black-and-white Warbler can be found in deciduous and mixed forests. The trees are usually mixed ages, which gives the warblers a large variety of foraging substrates. During the winter they prefer forest and forest edges from Florida to Colombia. While foraging in these areas they look for hidden insects in the bark of trees. To find these insects they act similar to a nuthatch and creep up and down the tree. They have extra-long hind claws and heavier legs that help to support them as they look for food. Their diet mainly consists of caterpillars, beetles, ants, flies, leafhoppers, aphids, spiders, and daddy longlegs.

These warblers begin their migration early and the males tend to arrive at their breeding grounds in late April. Once the female arrives and courtship begins, the males will chase the females around while singing and fluttering. The female will build the nest on the ground under dead leaves or limbs, against a shrub, rock, log, or tree. The nest can also be found in a cavity at the top of a stump. The nest is an open cup made of leaves, coarse grass stems, bark strips, pine needles, rootlets. It is also lined with fine grass or hair. The eggs are only incubated by the female for 10-12 days. Once hatched the young are fed by both parents and leave the nest before they are able to fly well at around 8-12 days. It is common for the Black-and-white Warblers nest to be parasitized by cowbirds. 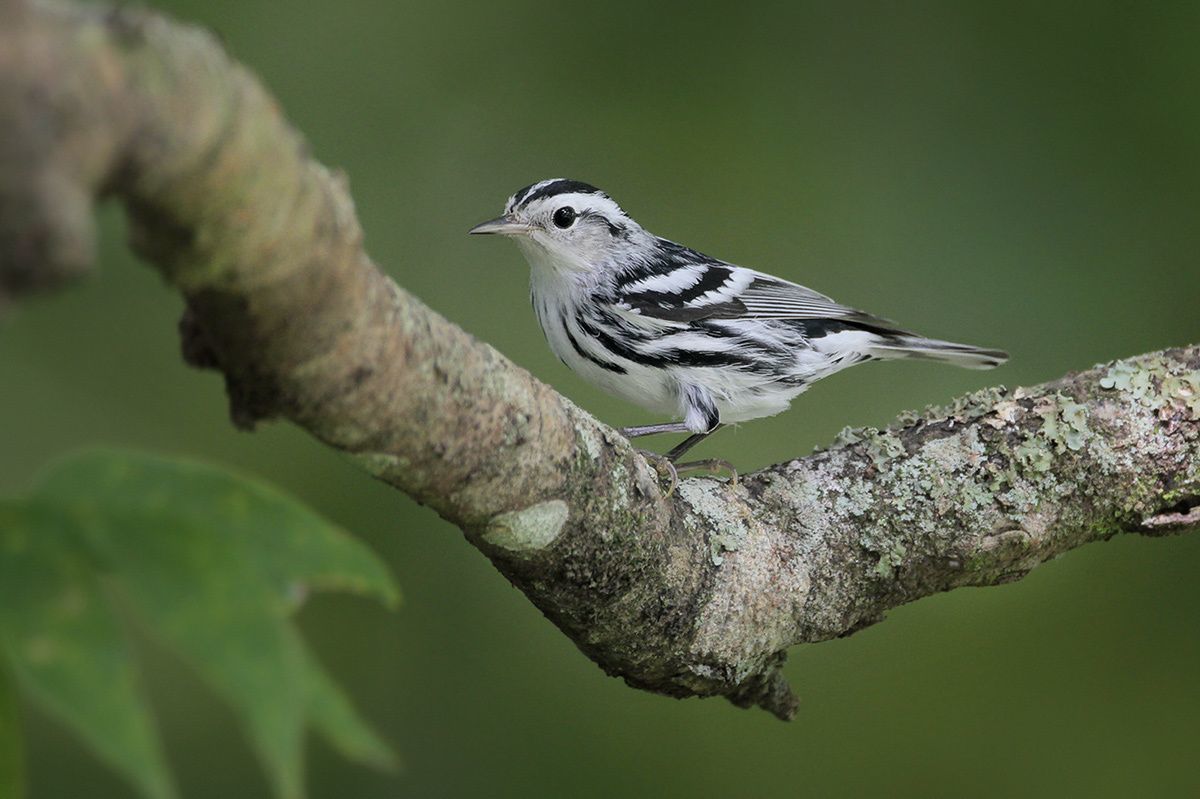 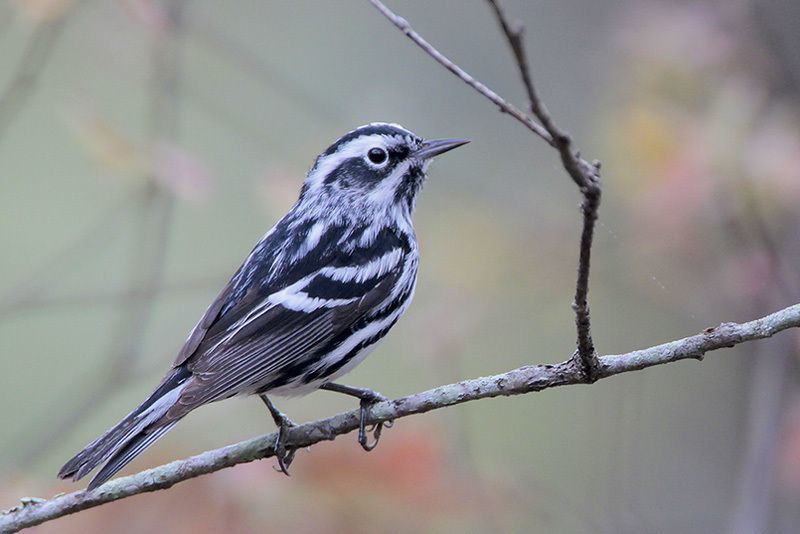 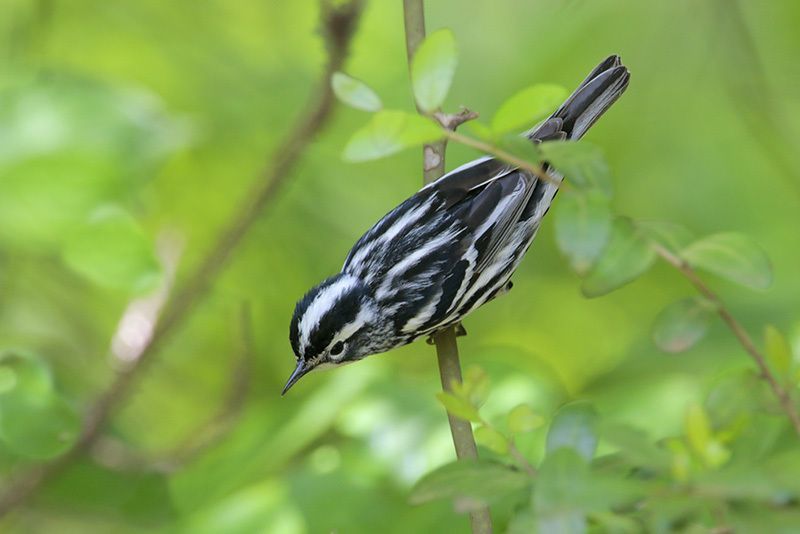 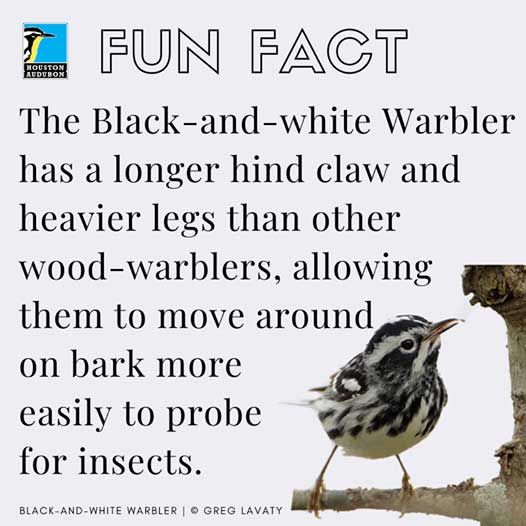