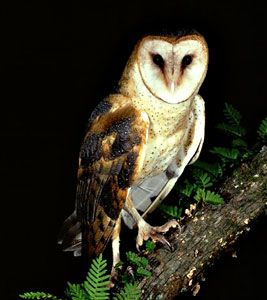 Preferred Habitat: May be found in many habitats, including rural areas and suburbs. During the day rests in suitable buildings such as barns, caves, and dense trees.

Seasonal Occurrence: Common mid-October through mid-April. Lesser numbers in the summer. Nests in our area.

Profile by Gislaine Peters: The Barn Owl is a pale medium-sized owl with dark eyes. Their head, back and upper wings are a mixture of buff and gray while their face, body and underwings are white. A distinct feature of this species is their satellite-dish-shaped face. They can be easily identified at night when they fly around due to their all white appearance and their raspy calls which sounds different from other owls hoots.

Barn Owls can be found in cavities, dense trees and man made buildings such as barns, silos and church belfries. The need large areas of open land to hunt in such as marsh, grasslands and agricultural fields. They hunt by flying low over the open areas listening for their prey which is mainly small rodents. Their main food source are voles but they can also eat mice, small rats, shrews and young rabbits. They have also been known to eat birds, lizards, insects and occasionally even frogs or fish.

When it comes time to breed Barn Owls are a monogamous species and tend to mate for life. Males attract a female using flight displays and loud wing-claps. Their nest are extremely simple and usually just consist of a depression made by the female. Although they tend to lay around 3-8 eggs Barn Owls can lay anywhere between 2-18 eggs and can have between 1-3 broods per year. The female incubates the eggs for around 29-34 days with the male bringing her food. While the chicks are still young the female will stay with them and the male will continue to bring food to the nest. After approximately 2 weeks the female will begin to hunt as well. Young usually start to fly at around 55-65 days old. They will either return to the nest to sleep or sleep nearby for several weeks afterwards.

Barn Owls can be found all year long in Texas and can sometimes be seen while driving along open country roads at night! 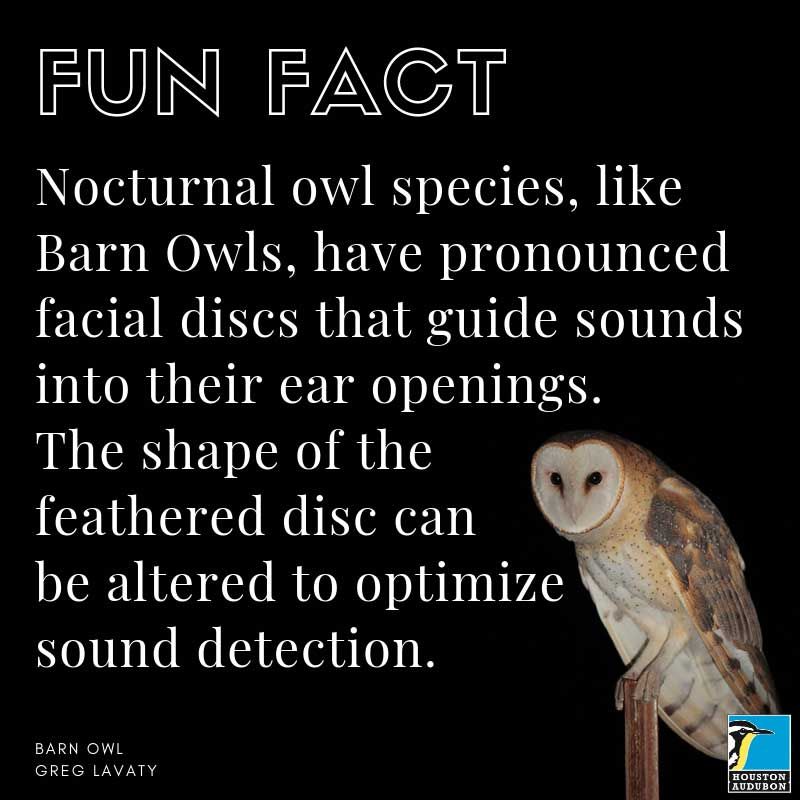