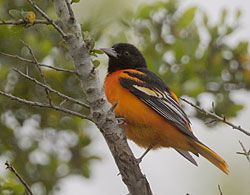 Notes: The plumage of the adult male Baltimore Oriole is striking as he moves among our neighborhood treetops. Adult males are flame-orange and black, with a solid-black head and one white bar on their black wings. Females and immature males are yellow-orange on the breast, grayish on the head and back, with two bold white wing bars. The immature males do not obtain the solid black head and adult plumage until their second year. Baltimore Orioles were named by early Maryland settlers after the black and orange coat of arms of George Calvert, First Lord Baltimore., who was instrumental in the proclamation of Maryland as a British colony.

The oriole’s hanging-basket nest is an engineering masterpiece woven with plant fibers, grasses, vine and tree bark and sometimes string or yarn. The nest is built in three stages: first, the female weaves an outer bowl of flexible fibers to provide support. Next, springy fibers are woven into an inner bowl, which maintains the bag-like shape of the nest. Finally, she adds a soft lining of downy fibers and feathers to cushion the eggs and young.

Baltimore Orioles eat insects, fruit, and nectar. They are acrobatic foragers, clambering across twigs, hanging upside down, and fluttering to extend their reach. They will readily come to hummingbird feeders and halved oranges. 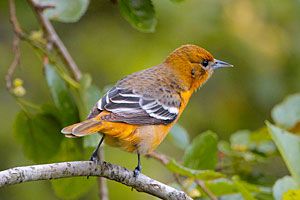