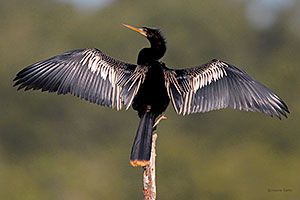 Seasonal Occurrence: Very common April through October. Less common in other months. Breeds in our area.

Notes by Richard Gibbons: The Anhinga is a large, dark water bird with a long, thin neck. It has a long, pointed bill and silver patches on the wings. They are graceful fliers and can travel long distances without flapping its wings. The Anhinga is known as a water-turkey for its swimming habits and broad tail. Another nickname is the snake-bird because of the way it swims with just the long neck and head sticking out of the water. They swim lower in the water than many other birds because it has reduced buoyancy due to wetted plumage and dense bones. They live in shallow, slow moving water and use nearby perches and banks. They are generally not found in open water, though it may nest on the edge of lakes and open bays.

The Anhinga’s diet consists mainly of small and medium-sized fish with small amounts of crustaceans and invertebrates. They primarily feed on catfish, mullet, pickerel, sucker, and gizzard shad. They sometimes also eat aquatic insects, crayfish, shrimp, snakes, baby alligators, and small turtles. They spear the fish through their side with a quick thrust of their bill. The fish are then tossed into the air and then swallowed headfirst. This method of side-spearing suggests that the hunting method is typically by stalking instead of pursuit.

The male begins to make the nest before it finds a mate using large sticks and leaves. The male then displays with waving wings, raising tail up, and pointing the bill towards the sky. Once the male finishes collecting all the nest materials and finds a mate, the female finishes building the nest. The Anhinga nests in loose groups of several to hundreds of pairs. They are usually nesting in mixed colonies of herons, ibises, and cormorants. There are usually 2-5 whitish to pale blue eggs. 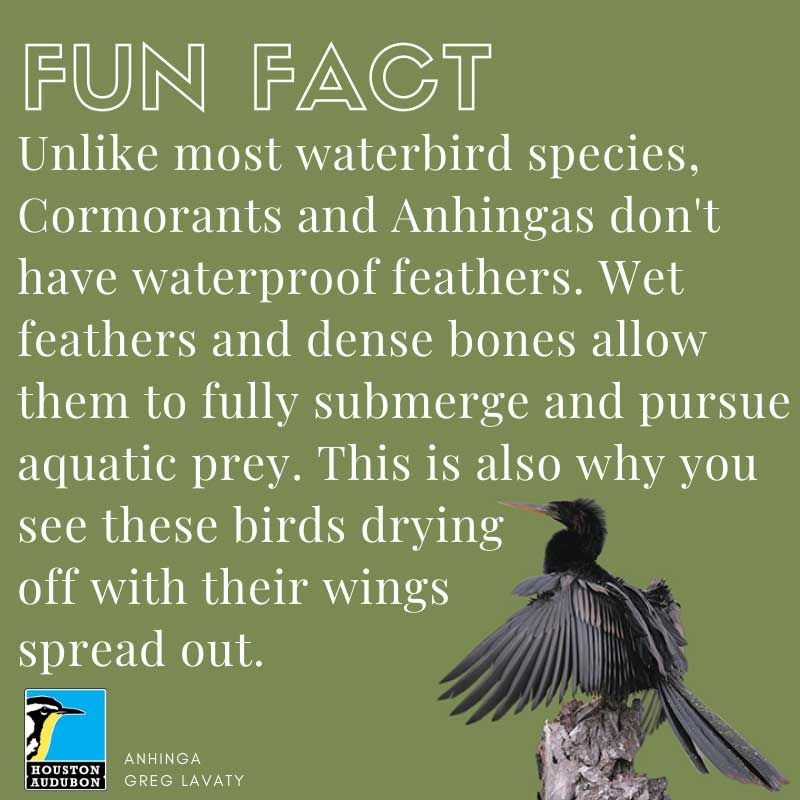