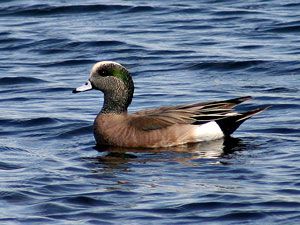 Profile by Abby Ficklin: The American Wigeon, once known as the Baldpate for the male's white crown, breeds throughout Alaska, Canada’s Northwest Territories and America’s mid/northwest regions. During breeding season the drake (male) is most distinguishable by his white crown, iridescent green post-ocular stripe, and dark brown back. While the female lacks aforementioned characteristics, she is recognized by her mottled gray head. Both have a rusty colored breast/flank and bluish-gray bill with a diagnostic black tip. Another field mark is the white shoulder patch seen in flight.

This medium-sized duck migrates along the central flyway down to the southern US, Central America, and northern South America. In addition, they are found wintering on North America's west and east coasts. American Wigeon’s favor shallow waters or small ponds, however they are also found in deep water where they have been observed kleptoparasitizing food from diving ducks. Commonly feeding on the surface of the water the wigeon ingests a greater amount of plant matter than any other dabbling duck species. This is probably because of its short bill which supports more force when foraging for plants.

During courtship a female usually has many male suitors that demonstrate tail-wagging, wing-flapping, head-turning and abrupt leaps from the water for her. Once the female has made her choice, she finds a dry, vegetated area to nest, then creates a small depression and fills it with grasses, weeds, and feathers. A female has one brood with 5-12 white eggs. She will care for these nestlings and fledglings for up to 3 months. 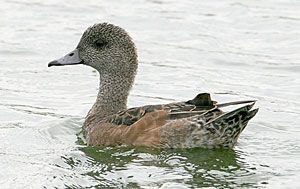