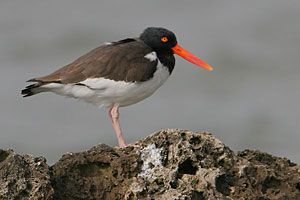 Notes: The American Oystercatcher is a large, boldly patterned shorebird. It has a black head and neck, bright red eyes, a brown back, white wing and rump patches, white underparts and a long, orange-red bill. True to its name, this bird specializes in eating oysters and other bivalves such as clams and mussels. In order to pluck the oyster body from its shell, the American Oystercatcher uses its bladelike bill to sever the oyster's adductors, the muscles that allow the oyster to open and close the two halves of its shell. The bird also feeds by carrying loose shellfish out of the water and hammering at the shell or by probing for buried soft-shell or razor clams. In addition to mollusks, they also consume sea urchins, starfish, crabs, and worms.

American Oystercatchers build their nests directly on the beach, making them very vulnerable to human disturbances as well as storms and other threats. This easy to identify shorebird can be found throughout the year on beaches and tidal flats. The best sites to observe American Oystercatchers are the Bolivar Flats Shorebird Sanctuary, the Texas City Dike, and Galveston Island.