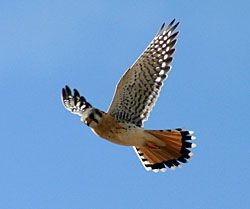 Profile by Abby Ficklin:  The American Kestrel is the smallest yet most numerous and colorful of the North American falcons. It was once referred to as the sparrow hawk because of its small size and its occasional sparrow snack. Unlike many raptors, which may prove difficult distinguishing male and females, it is quite easy to discern male and female kestrels. Both sport a white face with vertical black stripes and a short hooked bill, but the female has rufous orange wings while the male has blue-gray wings and an unbarred tail.

Kestrels are found as far north as Canada down to South America’s Tierra del Fuego. In Texas, at least two subspecies occur as residents, F. s. sparverius and F s. paulus. Kestrels tend to avoid dense woodlands and can be found perching on power lines or fencing in open or lightly wooded spaces such as grasslands, deserts, parks, pastures, and urban/suburban areas. When spotted on a fence post or similar object you may be able to catch them bobbing their tail up and down for balance.
In the breeding season male kestrels will defend a territory. Kestrels are usually lifetime monogamous pairs and once a mate is chosen, the pair will begin hunting, courtship-feeding, and looking for a nest. These falcons do not make their own nest or use any materials, instead they are secondary cavity nesters. Males will seek out natural-made cavities, artificial cavities, or nest boxes. Females will typically lay a single clutch with 3 to 5 white eggs with brown markings.

Squirrels are not the only ones who you see hiding their food, Kestrel’s do it too! These birds will hide food in any kind of hole or crevice for hard times or just to keep away thieves temporally. Unlike humans that see color in combinations of three color, birds can see color in combinations of four colors which includes ultraviolet light, a spectrum invisible to humans and other mammals. This ability makes it easier for them to hunt animals such as rodents. What do they see you ask? A urine trail! During the cooler months, American Kestrels can be found on power lines, fields, or forest edges.

There are two subspecies: the northern American Kestrel - Falco sparverius sparverius and the little (or southeastern) American Kestrel - Falco sparverius paulus. The northern subspecies is much more common and is found here in winter. The southeastern species is nonmigratory. It occurs in scattered populations from Florida along the Gulf Coast to eastern Texas. According to Robert McFarlane, Houston Bird Survey Coordinator, little American Kestrels tend to rely more on insects for food than do northern kestrels. He also reports that little kestrels "are readily distinguished from the larger northern males because the spots on their ventral surface are less abundant and limited to the upper breast and sides of the abdomen. The center of the abdomen is spotless". Adult males have bright orange legs; juveniles pale yellow. Little American Kestrels nest primarily in pines where they prefer to use abandoned Pileated Woodpecker cavities. They may also use nest boxes. The Northern Prairie Wildlife Research Center website contains directions for building and placement of nest boxes. There have been no recent reports of little kestrel nests in Houston, but they can be found in the East Texas Pineywoods. They are a possible candidate for listing as Threatened or Endangered by the U.S. Fish and Wildlife Service. 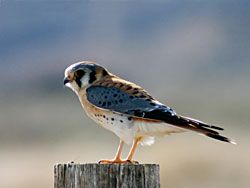 Profile by Glenn Olsen: Almost everyone enjoys spring birding, but I look forward to fall and winter birding with more excitement and anticipation. I enjoy the cooling temperatures of fall, the glorious fall wildflowers, and fall bird and butterfly migration. The fall migration of hawks into and through our birding area generates this excitement and anticipation. It is a joy to see each species, and it is difficult to pick a favorite. However, we will look at our smallest bird of prey, the American Kestrel.

Our most commonly seen falcon, the American Kestrel shows the characteristic falcon flight silhouette; namely, relatively long wings that taper to pointed wingtips, compact body, and a distinctive wingbeat. When perched we are able to observe the beautiful plumage of this species. The upperpart (back, rump, most of tail) is rufous with black barring. The wings of males are a steel blue-gray color; the wings of females are primarily rufous with dark barring. The underpart of the female is usually white with rufous to brownish streaks. The underpart of males usually has pale rufous orange on the breast fading to white on the lower belly with variable spotting throughout. The facial pattern is distinctive; a white face with bold, vertical black stripes. The tail is bright rufous with a subterminal black band. When perched, this species frequently bobs its tail.

We usually begin to see kestrels around mid-August, and the numbers increase during the winter months, becoming fairly abundant. Favored habitats include grassland areas, open woodlands, parkland, and agricultural fields. It is frequently seen perched on telephone wires in farmland areas. The American Kestrel is a perch and aerial hunter, feeding on insects, small reptiles, small rodents, and occasionally small birds. It hunts from the air and, when prey is spotted, hovers to prepare for the descent and capture.

The American Kestrel is a secondary cavity nester, utilizing old woodpecker holes, natural cavities, and nest boxes for nests. This species breeds in parts of Texas and throughout the U.S. and parts of Canada. Some excellent locations to find American Kestrels are Smith Point area for migration and the Katy Prairie and Anahuac Wildlife Refuge area for winter observations. 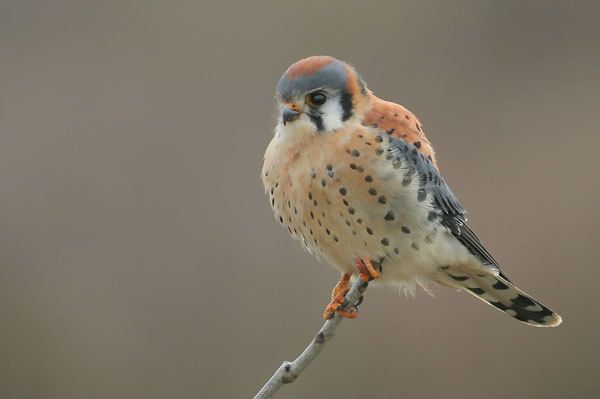 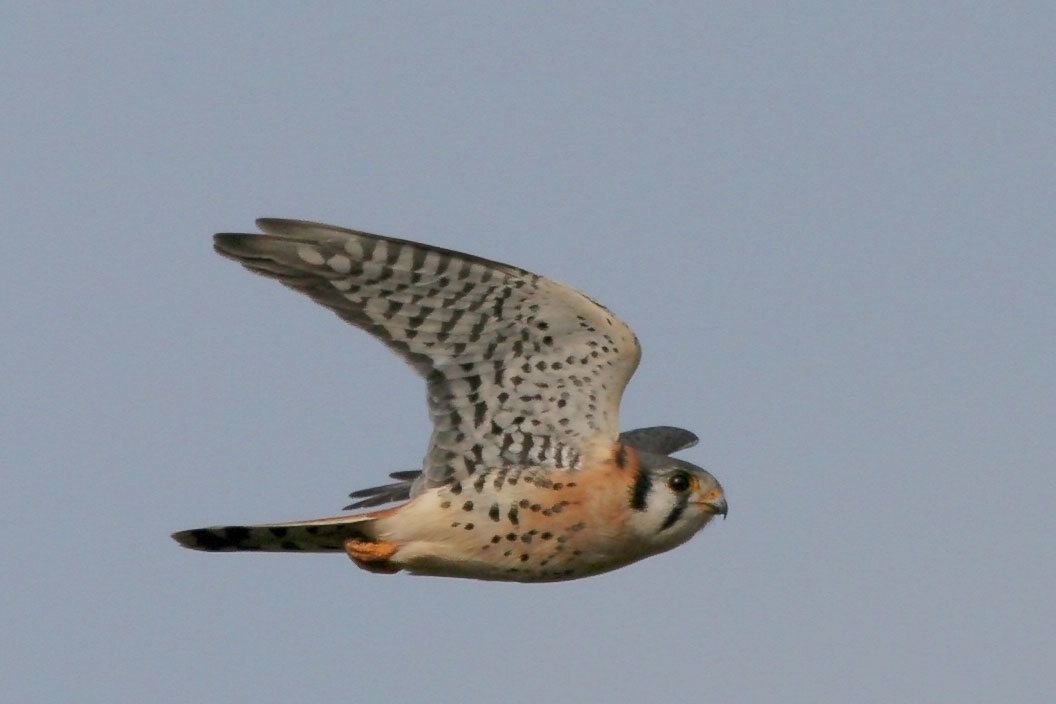 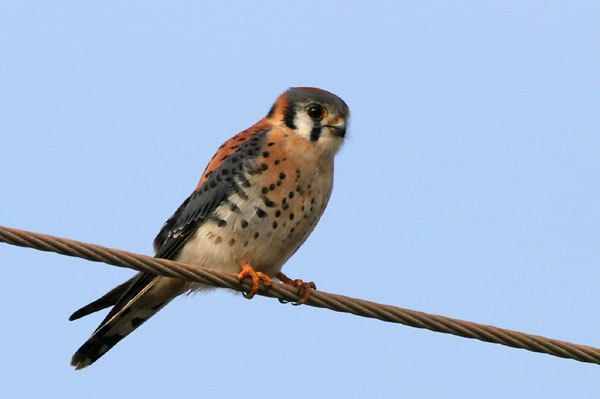