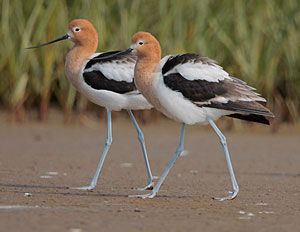 Seasonal Occurrence: Common December through May. Uncommon to occasional other seasons.

Profile by Glenn Olsen: The American Avocet is a slender, moderately large, strikingly handsome shorebird that we can enjoy seeing in our area most months of the year. In winter plumage the head and neck are mostly off-white to grayish; the underparts are white; the wings and back have a pattern of broad black and white stripes when standing and more of a chevron pattern in flight. In breeding plumage the head and neck of males is a beautiful cinnamon color with the remainder of the plumage being very close to the winter plumage pattern. Long bluish-gray legs and a long recurved bill further distinguish the American Avocet.

We often see this bird feeding in the water with head down, bill in the water and sweeping the head and bill from side to side (scything). The extremely sensitive bill detects and catches aquatic invertebrates as the Avocet walks and sweeps. The number of birds present on the upper coast may vary as this species migrates through our area to either wintering or breeding grounds. Generally this species breeds in the central and western U.S. and southern Canada around or near seasonal wetlands, potholes of the prairie, inland lakes, salt ponds, the Great Salt Lake, and man made impoundments. The common winter range includes California, Texas, Florida, Baja, Mexico and parts of Central America.

The American Avocet can generally be found at Bolivar Flats Sanctuary, in and around the bays of Galveston, Surfside, and other similar habitat along the coast of Texas. Sometimes one may see these beautiful birds in a small group with only a few birds, other times one will find a large group of birds, but when you find a flock of several hundred and upwards feeding, resting and preening it is a stunning, awesome sight and experience! 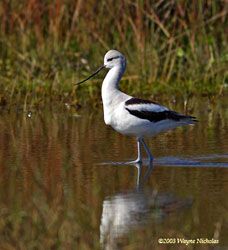 Profile by Jon Piasecki: Known for its long, upturned bill, the American Avocet is a wading bird that is commonly seen foraging in wetlands, salt ponds, mudflats and occasionally rice fields. This species breeds in parts of the western and midwestern United States as well as portions of southern Canada. They extend their wintering range to the Texas and Florida coasts, Mexico, and parts of the Caribbean.

American Avocets often utilize a technique called “scything” when they forage for invertebrates and small fish in shallow waters. They swing their bills side to side with each step in a continuous motion. Large flocks of avocet may forage this way in dense groups making for a magnificent display. Outside of “scything,” American Avocets may also peck into the water with their bills or plunge their entire necks into the water to capture prey.

During the breeding season, males will carry out displays in which they preen themselves, splashing water intensely. After forming a mating pair, the male and female will intertwine necks and run. Avocet pairs select a site for their nest together, usually picking an area with very little vegetation, often on islands. The nest is made by forming a scrape in the ground and adding objects such as grass or pebbles around the bowl. American Avocets typically lay a clutch of 3-4 green-brown, spotted eggs. The eggs hatch between 18-30 days after they are laid.

This time of year (written in November 2022), large flocks of American Avocet can be seen all along the Bolivar Peninsula, from High Island beach to Bolivar Flats. Next time you are around mudflats or shallow water, be sure to check for these beautiful birds! 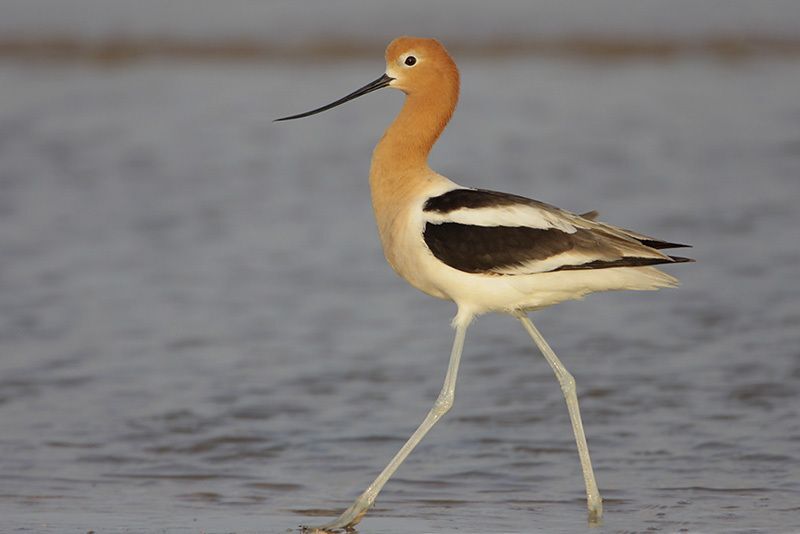 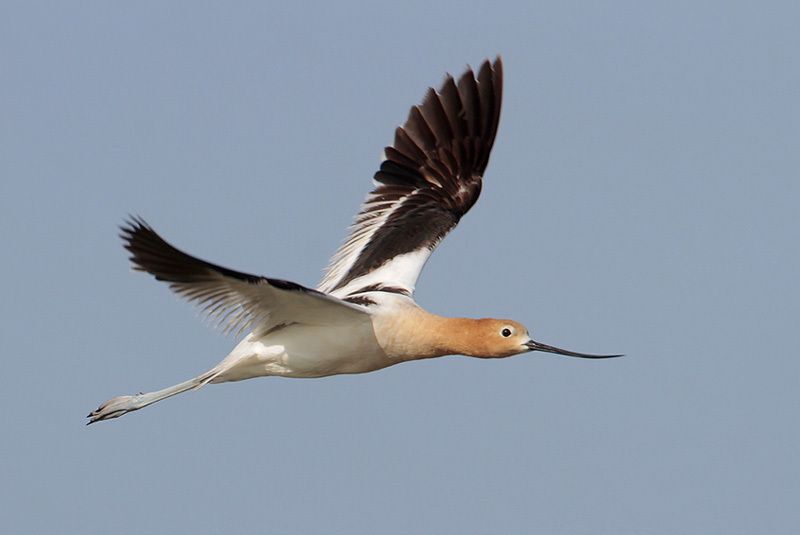 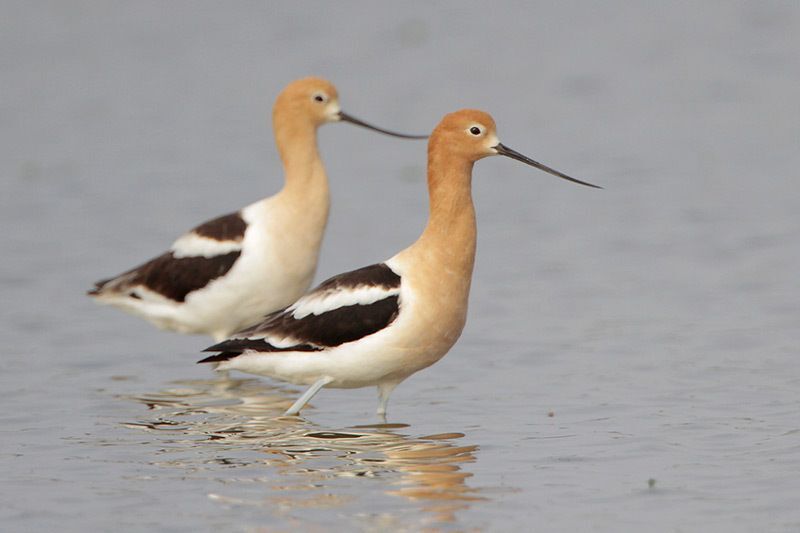 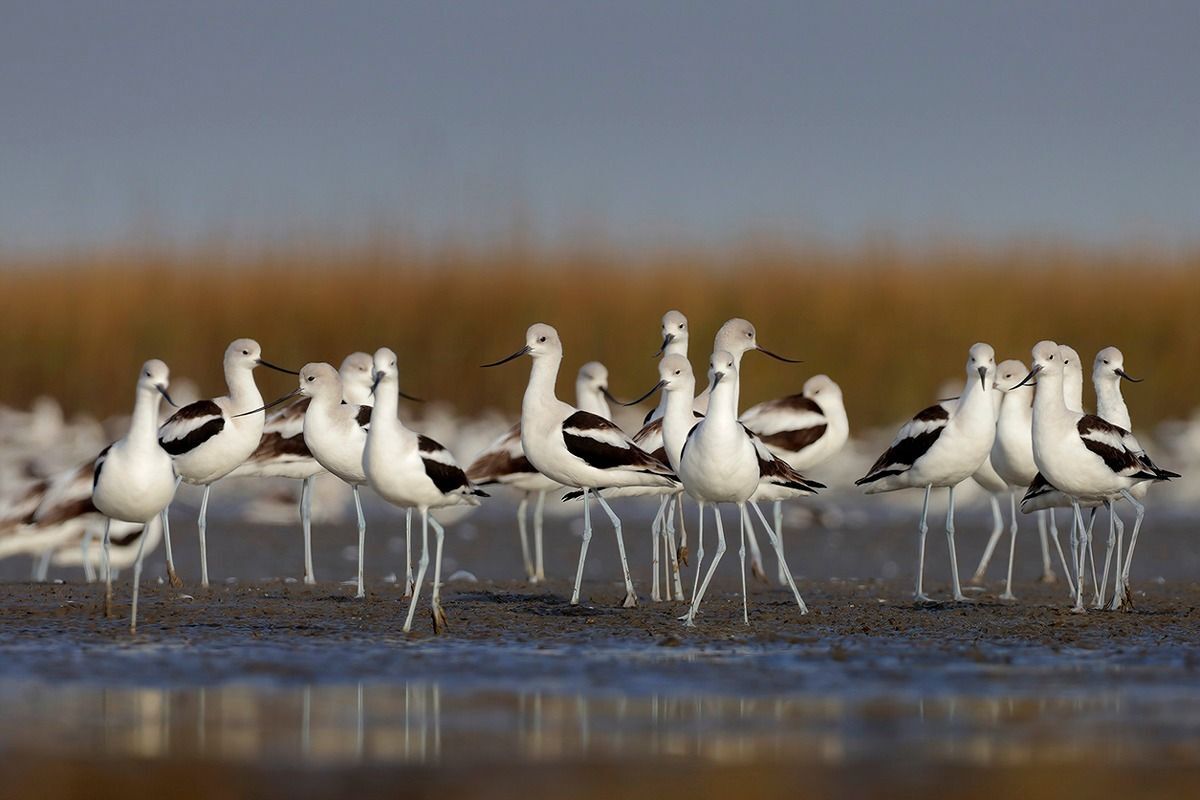