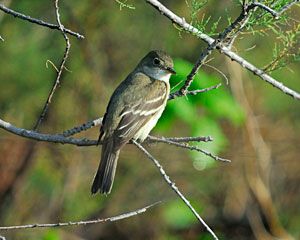 Notes by Susan Billetdeaux: One of the confusing "empids" (grayish plumage with pale wing-bars and eye-rings), Alder Flycatchers are best identified by their call, a buzzy free-BEEER-yeer with strong accent on the first syllable. Alder Flycatchers and Willow Flycatchers formerly were considered one species, "Traill's Flycatcher", and many birders continue that tradition. They are extremely difficult to separate by visual means alone. In direct comparison, Alder Flycatchers have slightly shorter bills. Alder Flycatchers breed in Canada and the northeastern states where they favor alder and birch trees in swamps.