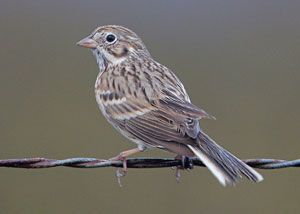 Notes: Vesper Sparrows are best identified by their relatively long tails which are bordered with white outer tail feathers. This feature is most easily seen in flight. Other identification marks include their streaky appearance and white eye-ring. They also have a chestnut patch on the shoulder, but this is often obscured. The name "Vesper" was acquired from their habit of singing late in the evening. The song consists of two long notes followed by shorter notes and trills. Vesper Sparrows prefer dry fields. Look for them on the Katy Prairie. They are generally not found in large flocks but sometimes associate with other sparrows.
- Susan Billetdeaux