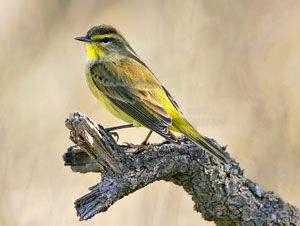 Profile by Richard Gibbons: The Palm Warbler is a medium-sized wood warbler. Easily identifiable in breeding plumage the palm warbler has a yellow to olive colored belly and head with a chestnut cap, streaked flanks on its breast, and a gray back. During winter plumage it is a monotonous gray color with striking yellow under-tail coverts. This warbler winters in the boreal forest and bogs of Canada, into parts of northern North America and winters along the southeastern coast to Texas’ gulf coast region and some parts of Central America and the Caribbean.

The Palm Warbler primarily feeds on small invertebrates and sometimes seeds and fruit that are low or on the ground. They have a habit of constantly pumping their tail, making identification more distinguishable. This warbler has two subspecies; a western and eastern. While the western is more common in Texas, the eastern can be seen as well and has been named the Yellow Palm Warbler due to its considerable amount of yellow feathers.

The Palm Warbler is an early nester and will make a nest out of a wide variety of materials near the base of a tree. Sometimes the male will have more than one mate and usually a female will have at least 2 broods per year. Each brood ranges from 4 to 5 eggs that are cared for and fed by both parents. Places you may try to find this bird in the cooler months are Smith Point, Sheldon Lake State Park, and Anahuac National Wildlife Refuge.