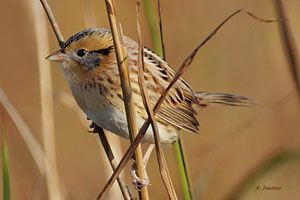 Profile by Glenn Olsen: I look forward to our winter months for many reasons, two of which are cooler temperatures and the return of the native sparrows that winter on the Upper Coast. Many people are unaware that the Upper Coast is an excellent area to see native sparrows. Excluding vagrants of the family Emberizidae (sparrows), the state has 38 species of sparrows. In our area it is possible to see 21 of the 38; that’s about 55% of all the sparrows for Texas!

An attractive little sparrow that winters in our fields and coastal prairie is the Le Conte’s Sparrow. They are somewhat secretive, not easily seen, and are found in fields with a mixture of spent wildflowers and grasses where they feed on the seeds of grasses, forbs, and a few insects. They are especially fond of fields of bluestem grasses (Andropogon). They depart the breeding grounds in Canada and the northern parts of the Dakotas, Minnesota, Wisconsin, and the upper peninsula of Michigan and begin arriving in our area around mid-October but are more numerous from December to mid February.

Like many sparrow species the plumage aspect is one of subtlety, with nuances of browns, grays, and whites but with a dash of buffy orange in the breast, eyebrow, and face. All of our native sparrows are uniquely attractive birds; most of them have plumage in soft, earth tones that enables them to blend with the winter colors of the soil and grasses of the fields, marshes, and prairies.

There are conflicting reports of which Le Conte the sparrow is named after, as there were several Le Contes of the early to mid 1800s who were active naturalists. One account attributes John James Audubon as naming the species after John Lawrence Le Conte, a young physician and promising naturalist whose special interest was entomology, especially beetles.

Without a doubt, sparrows are challenging to identify, but with practice, patience and experience they become fun and exciting. I look forward to winter and the arrival of sparrows and thoroughly enjoy seeing these remarkable and attractive birds every year.

Notes: Le Conte's Sparrow is secretive and difficult to spot in its preferred habitat of tall, dense, grass. Spotting one is made even more difficult since it often runs along the ground rather than taking flight when startled. However, David Sarkozi reports that it does respond to "pishing." Le Conte's Sparrows are similar in appearance to Nelson's Sparrows. Le Conte's may be identified by their crown stripe and brown nape. Juveniles have less distinct markings than adults. Population numbers are stable and may even be on the increase, according to the Cornell Lab of Ornithology, but because it is so secretive, its life history is not well understood. Population trends are similarly difficult to evaluate. Le Conte's Sparrow is on National Audubon's WatchList. Find more information about its life history and conservation status on its page in the Audubon WatchList.
- Susan Billetdeaux 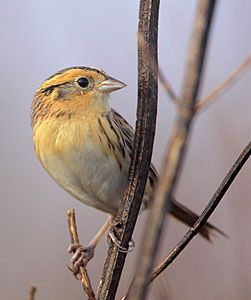