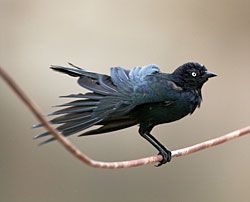 Notes: The Brewer's Blackbird is quite common in Texas, but its name is often not known by non-birders, who tend to lump them together with the other blackbirds (cowbirds, starlings, grackles, Red-winged Blackbirds). Brewer's Blackbirds usually are found in small flocks and do not generally associate with other species. Distinguishing traits for this species include non-keeled tail (unlike grackles), pale yellow eyes, and the habit of walking with a head jerk accompanying each step.
- Susan Billetdeaux 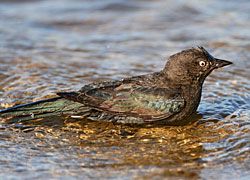