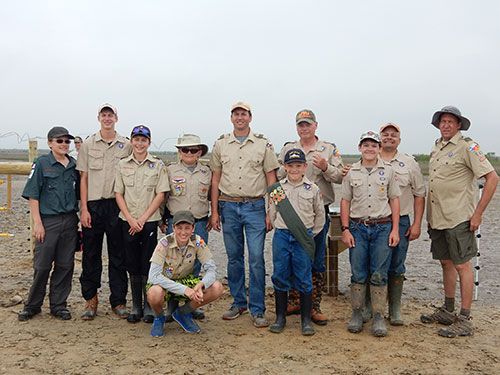 Imperiled Least Terns at the Bolivar Flats Shorebird Sanctuary just got a helping hand from the Boy Scouts. On March 17, a team of Scouts led by Eagle Scout candidate J.P. Pinteralli, headed to the sanctuary with some 750 lbs. of tools and fencing equipment in tow. Working alongside field staff from Houston Audubon and American Bird Conservancy (ABC), they installed electric fencing at a key nesting area to keep predators away from the terns and their chicks.

“We’re sure that we’ll be able to get it done,” Pinteralli said. "Helping the birds is the right thing to do.”

Nesting tern colonies at the site have been hit hard in recent years by unusual flooding and by predators. The smallest terns in the Americas, Least Terns nest on sandy ground, which puts them within easy reach of mammalian predators.

“Coyotes are the most frequent predator for our beach-nesting birds at Bolivar Flats” said Kristen Vale, Gulf Conservation Program Coordinator for ABC’s Coastal Birds Program. “They know where the birds are.”

Conservationists can’t control floods but they can do something about coyotes. “The simplest thing to do is try and exclude those predators from nesting areas,” says Peter Deichmann, Sanctuaries Manager for Houston Audubon.

J.P. Pinteralli designed his Eagle Scout project around helping the terns after he heard Vale speak at an Earth Day event and his troop helped do several beach cleanups. His father and troop leader, Joe Pinteralli, described the work as part of the Scouts mission. “We’re supposed to be good stewards of the Earth for the next generation,” he said.

For the Bolivar Flats project, Deichmann and Vale provided the conservation know-how, and the Scouts did the heavy lifting. Boy Scout volunteers from several troops lugged tools and electric-fencing material, including heavy fence posts and wire, about a third of a mile to the nesting site in an inner part of the sanctuary. There they dug post holes, string wire, and set up the charger to electrify the fence.

It’s hard work for a good cause. “That’s what Scouts are about,” says Joe Pinteralli. “They have strong backs.”

Over the next year, J.P. will work with Vale to collect data on how well the fence works to keep the birds safe from predators. That research will make him eligible for a Scouts’ William T. Hornaday Award, given to recognize serious contributions to conservation.

“This kind of collaboration between the community and bird conservation organizations benefits the birds greatly,” said Kacy Ray, ABC’s Gulf Coast Conservation Program Manager. “When we all take measures towards stewardships for the birds and our land, birds and people both win.”

American Bird Conservancy is dedicated to conserving birds and their habitats throughout the Americas. With an emphasis on achieving results and working in partnership, we take on the greatest problems facing birds today, innovating and building on rapid advancements in science to halt extinctions, protect habitats, eliminate threats, and build capacity for bird conservation.