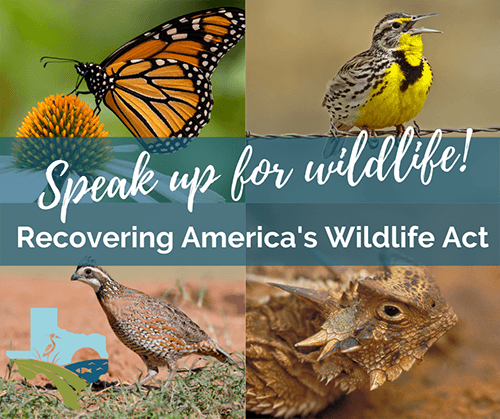 Please contact your U.S. House Representative and the U.S. Senators from Texas (Senator John Cornyn and Senator Ted Cruz) and ask them to vote YES for the Recovering America’s Wildlife Act.

By doing so, you are an important voice to recover wildlife for current and future generations of Texans.

Go to your US Representative’s website and send him or her a message, or call them at the Washington, DC, number on their website and ask them to vote YES on the Recovering America’s Wildlife Act!  You can learn who represents you at https://www.house.gov/representatives/find-your-representative

What passage of Recovering America's Wildlife Act means for at-risk species in Texas and across the United States:

Learn more about the bill at: www.txwildlifealliance.org

If you need assistance contacting your Members of Congress, please reach out to info@txwildlifealliance.org.