Monty the Piping Plover Back at Bolivar Flats 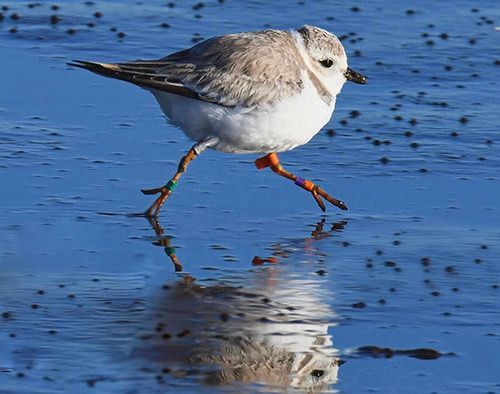 For the second year in a row, Monty the “celebrity” Piping Plover was spotted at Houston Audubon’s Bolivar Flats Shorebird Sanctuary by the NYC Plover Project! Monty and his mate Rose were the first Piping Plovers to nest within the Chicago city limits since 1955, and have been successful at fledging chicks. They made headlines for stopping a beach concert from happening near their nest site in 2019. Rose and her offspring have been spotted wintering in Florida in past years. Learn more about Monty and Rose at ChicagoPipingPlovers.org.

The Great Lakes Piping Plovers are an endangered species at risk of becoming extinct. The primary reasons for this are habitat loss or degradation and nest disturbance and predation. Piping Plovers are very sensitive to the presence of humans, so please be sure to keep your distance and avoid disturbing resting or foraging birds. He has an orange band with a yellow dot and a green band with #202. Let us know if you spot Monty!