Eskimo Curlew–Gone But Not Forgotten 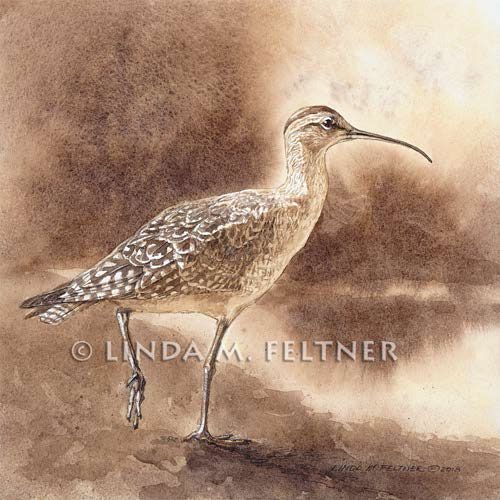 As a bird artist, I shall never paint this curlew from life. No one can, in all probability. Bringing an extinct bird back to life through scientific illustration was my way of paying homage.

My personal interest stemmed from my husband, T. Ben Feltner, who re-discovered the Eskimo Curlew on Galveston Island, March 22, 1959, along with his friend Dudley A. Deaver. This sighting shocked the ornithological world and encouraged research for further evidence that the birds might have a viable population. Despite diligence on the part of many searchers along the Texas Coast, the last confirmed record in the contiguous U.S. occurred when two birds appeared on Galveston Island in late March 1962 and left a few weeks later in early April. Formerly one of the most abundant birds in North America, the Eskimo Curlew is now listed as Critically Endangered on the IUCN Red List but is thought to be extinct.

Without personal knowledge of having seen a living bird, my research began by investigating resources that would supply crucial information. Observing and measuring specimens at the Smithsonian National Museum of Natural History provided a heavy-hearted but significant opportunity to get a feel for the size, coloration and variety. Further assistance from Dr. Dennis R. Paulson, Director Emeritus of the Slater Museum of Natural History, Tacoma, WA, enabled study of their specimens from which measurements could be made and details noted.

My experience as a long-time birder and bird artist allowed me to build the bird using Whimbrels as models. Whimbrels are common shorebirds easily studied for general body structure, balance and posture. Illustrations could be built from measurements of museum specimens and the few revealing photos of the last living bird on Galveston Island taken by Don Bleitz. Of course, listening to first-hand knowledge from one of the few people alive today who has intensely observed a living bird, Ben’s knowledge and inspiration was invaluable.

Starting with a posture of a Whimbrel, anatomy was adjusted on 7-9 layers of overlying tracing paper to transition and reshape it to a new species. When the drawing was complete with feather patterns, bill and foot shape, it was transferred onto Fabriano Artistico cold-pressed watercolor paper. Painted with transparent watercolor, some pencil markings were left visible for a loose, sketch effect. When finished, the painting was digitally captured and printed in limited editions.

The single image, “Eskimo Curlew”, is represented as part of the Artists for Conservation’s Silent Skies Mural, exhibited at the 27th International Ornithological Congress, August 2018 in Vancouver, British Columbia. The mural features 678 endangered species of birds of the world and is now traveling to international venues.

The curlew trio entitled “Eskimo Curlew-20th Century Bird” was exhibited in Washington D.C. in the gallery of the American Association for the Advancement of Science, July-October 2018. The annotated trio was part of the Guild of Natural Science Illustrator’s 50th Anniversary Juried Member Exhibit.

My aim is to provide a spark, to awaken curiosity and invite questions, to promote an appreciation of the complexity of nature and to foster a desire to protect it.

Linda Feltner is an award-winning nature artist and educator with close ties to Houston Audubon. In 1988, she created the original design of our logo, and for the past 24 years she has donated the design for the High Island patch.