Our Very Own Mixed Flock 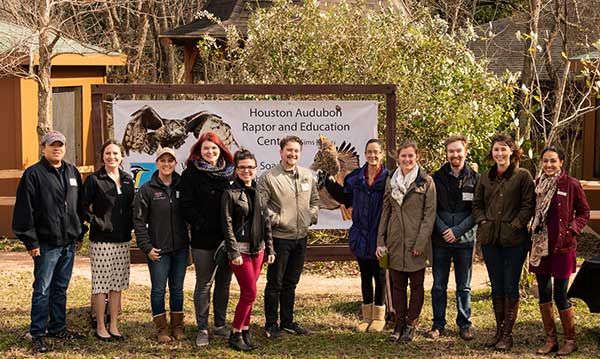 Photo: YPAC members at the opening of the Raptor and Education Center

Every serious birder knows that if you're looking for something special, it's a good idea to find a mixed flock. Even on days when it seems like nothing is moving, a single mixed flock can be a game changer. I experienced this firsthand a few days ago when I made my way to Bear Creek Pioneers Park to do some casual weekend birding.

For much of the morning I was in the doldrums—not a chickadee in sight! Then, as if out of nowhere, I heard a cacophony in the trees to my left. Sure enough, a large mixed flock of Yellow-rumped Warblers, Orange-crowned Warblers, Carolina Chickadees, and Ruby-crowned Kinglets was moving through. All of a sudden, the place was hopping! I knew there was bound to be something special mixed in. As I scanned the foliage in typical twitcher fashion, something unusual caught my eye—yellow undertail coverts, pale supercilium, faint streaking on the breast, dull brown crown, and a wagging tail… A Palm Warbler, and a lifer at that! It was a splendid find, and one that I believe was only possible because I was alerted by the presence of a mixed flock.

This year, Houston Audubon had a mixed flock of its own move through. This one, however, wasn't composed of birds. Rather, it was made up of fifteen young professionals who together formed the Young Professionals Advisory Council (YPAC). From an associate at a private equity firm to a researcher at Baylor College of Medicine to a natural resources specialist from Houston Arboretum, this group of 20 and 30-somethings contained a rich diversity of interests and skill sets.

At our initial meeting in January, Houston Audubon staff encouraged us to think big in terms of the impact we were going to make. That first brainstorming process led to the vision of Houston Bird Week, a week-long celebration of Houston Audubon's 50th anniversary. In the same way that Bear Creek mixed flock brought with it a fantastic collection of species, this group of passionate individuals brought Houston Audubon a beautiful smorgasbord of creative projects.

We coordinated bird walks and park cleanups across the city, helping raise awareness for conservation and environmentalism. We teamed up with Bakfish Brewing Company to create PALEican, a custom bird-themed beer available in Houston-area bars and restaurants. We curated innovative programs such as Birds, Health, and the Human Spirit, which brought Houston Audubon's message to new audiences. We formed teams for the annual Birdathon, raising some serious cash. And we even assisted in working with the mayor's office to designate the Official Bird of Houston, the Yellow-crowned Night-Heron!

The immediate impact was obvious, but through it all we also formed lasting friendships and new partnerships that will positively impact Houston's culture of conservation well into the future.

It was a real joy to be a member of the YPAC this year, and I look forward to continuing my involvement in 2020. Be on the lookout—you never know what surprises the next mixed flock will bring!