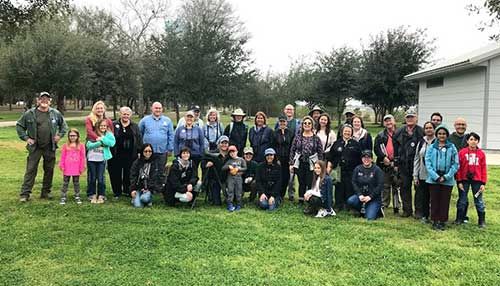 The teams were set. The playing field determined. The weather was cooperating. Super Bird 53 arrived on Saturday, February 2, 2019, to gray skies and a few sprinkles from overhead clouds. The weather did not deter the teams from arriving at the appointed time.

Over 40 hardy birders, both young and old, gathered on the blacktop to divide and conquer. At 10 AM sharp the eBirding started for both the Superb Owls and the Gridiron Goatsuckers. The Goatsuckers were playing it cool but inside were truly out for revenge and glory. The Owls silently flew off to the south end of the park while the Goatsuckers headed north and logged 30 species in 15 minutes!

They could taste victory, but knowing the Owls had some very wise birders on hand did not build up their confidence at this early stage in the game. The time was ticking and both teams were counting cormorants and pipits. The Goatsuckers were a bit distracted by a cooperative Osprey and Red-shouldered Hawk. The Owls were circling the ponds and finding snipe and yellowlegs. The Goatsuckers were searching for munia and desperately searching for a single Little Blue Heron.

As the clock neared noon, the Goatsuckers realized that the end zone was a good distance away. They elected their quarterback, Mary Anne Weber, and one of the youngest birders, Brie, to run the mile plus back to the lot to make the deadline. They ran as fast as possible as the team continued to text species to them as they arrived in the end zone at 11:58 AM and submitted to eBird at exactly Noon. Both teams then gathered round for the results show.

The Superb Owls ticked 54 species and, in a moment of utter glory, the Goatsuckers realized they had squeaked past the raptors with a single Muscovy Duck that gave them 55 species. The Goatsuckers will tour other birding areas for the next year, so there will be many opportunities to meet and greet the winning team. But in all seriousness, everyone had a great time and the Superb Owls and Gridiron Goatsuckers look forward to Super Bird 54!

Click here to see a photo gallery of the event showing the birds and the people that participated.

Here are the two checklists:

View this checklist online at https://ebird.org/view/checklist/S52299242