How Houston Can Help Migratory Birds 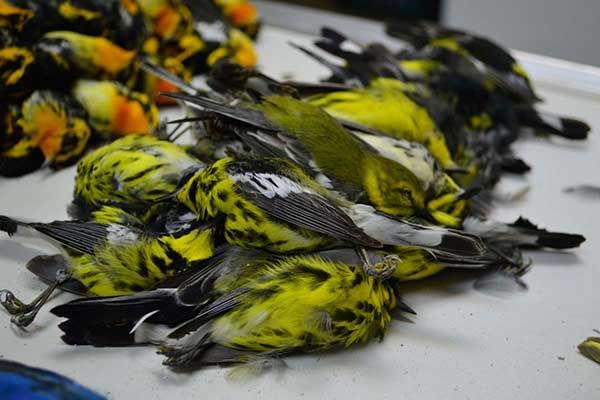 The following article appeared in the Houston Chronicle on September 18, 2018.

Photo: In May 2017, nearly 400 migratory birds were found dead outside the American National Building in Galveston, the result of collisions with the building or from exhaustion related to light confusion. Photo by Josh Henderson, Galveston County Animal Control.

Each fall, more than four billion birds fly through the U.S. Collisions with buildings will kill 600 million of them.

Most of these birds are migratory, traveling between wintering and breeding grounds using the stars and other innate systems as their guide. Because many birds migrate at night and rely on celestial cues, our lighted urban environment can cause confusion and disorientation, putting these travelers in harm's way.

A recent study of migratory birds and light pollution listed Houston as one of the top five U.S. cities for collision risk. Our expansive urban footprint and location on both the Gulf Coast and the Central Flyway are the cause.

The Upper Texas Coast is one of the best places in the world for birdwatching, attracting nature tourists hoping to see 20 warbler species, 30 shorebird species and 20 raptor species — in a single day. There isn't a day of the year that birds aren't passing through or stopping over in the greater Houston region. During the peaks of spring and fall migration, millions of birds of more than 200 species are stopping over to rest and refuel. It really is that birdy here.

Many of these birds — such as the blackburnian warbler or scarlet tanager — fly more than 600 miles across the Gulf of Mexico each spring on a nonstop flight that takes more than 15 hours to complete. When they reach the coast, they are often exhausted and seek fresh water and appropriate habitat to recover before they continue their journey northward.

Houston's vast coastal prairies and woodland corridors along our rivers and bayous helped shape these epic treks, but now these birds encounter an urban footprint with greatly reduced habitat and increased threats such as light pollution, exotic predators and reflective glass surfaces at our homes and offices.

An opportunity to study the light pollution interaction with birds was discovered soon after the 9/11 Memorial in Lights installation debuted in New York City. The memorial has large, brilliant beams of light that shoot four miles upward into the night sky. New York City Audubon staff and volunteers soon noticed that when conditions were good for migration, birds became trapped in the lights, apparently disoriented and unable to continue on their migrations. But when the lights were turned off briefly, the birds would disperse and continue their southward flights.

Most often the birds aren't so fortunate. In May 2017, nearly 400 brilliantly plumaged migratory birds were found dead outside the tallest building in Galveston, the result of collisions with the building or from exhaustion related to light confusion. These birds normally migrate at much higher altitudes, but during storms and other weather events, they drop to lower altitudes where headwinds are lowest. This puts the birds at a greater risk of collisions with urban structures. That night in Galveston was one of those nights.

Spring migration was in full swing and the stormy weather conditions brought the birds down to where urban lights and structures created a deadly situation. The building owners quickly responded with turning out the lights during migration and providing leadership on how the City of Galveston could come together to limit future occurrences. Because the building owners were able to respond to this tragedy with clear commitment to wildlife and to the Galveston community overall, National Audubon declared their efforts one of the top conservation success stories of the year.

Following this event in Galveston, Houston Audubon developed a Lights Out for Birds program where organizations and individuals can receive notifications to turn off lights when conditions appear most threatening for birds.

Fortunately, the Cornell Lab of Ornithology's BirdCast program that predicts how intense migration will be in a given area launched new tools to support these notifications. If building managers and residents across Houston can turn off lights during migration or design lighting with wildlife in mind, we can transform this threat to birds into rallying recognition that Houston takes pride in its special role anchoring the Central Flyway along the Gulf of Mexico. Practically, it would also save quite a bit of energy.

Ultimately, we have a choice to recognize our shared natural heritage and make changes that will allow future generations to enjoy the prairies, wetlands and woods filled with birdsong and life, a full complement of our migratory birds marking the seasons and enriching our lives.

Richard Gibbons is the Conservation Director and Sarah Flournoy is the Bird-Friendly Communities Program Manager for Houston Audubon.

Here is a link to the Houston Chronicle article.