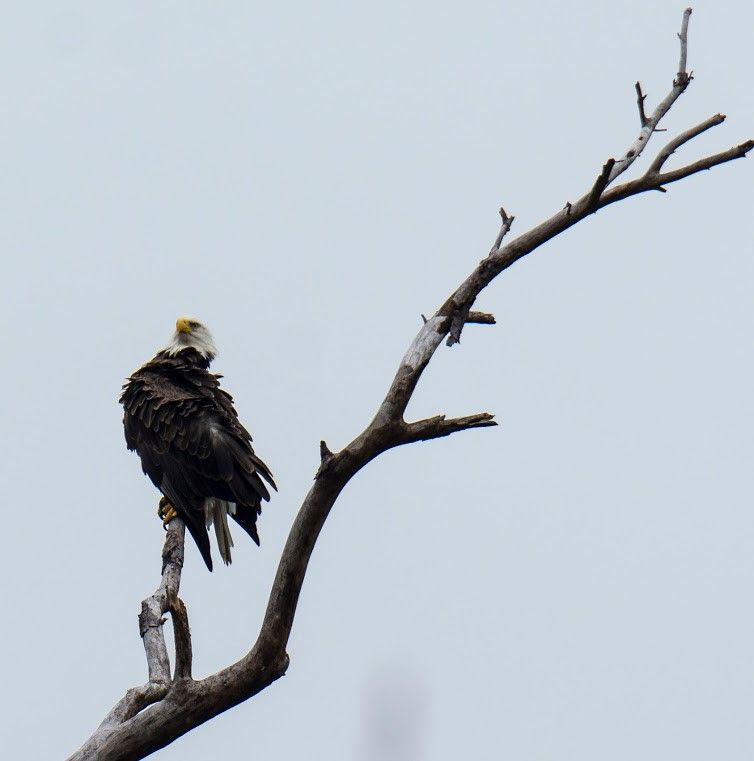 This past Monday, February 5, 2018, a hearty group of seniors gathered at Memorial City Mall for the February Bus Trip. The sun was peeking out behind the clouds and spirits were high for a sunny morning. The sun would not last however but that did not dampen spirits. Our great group battled Houston traffic to reach the bus on time and one even took a scary Uber drive with a crazed one-eyed driver.

When all arrived we were soon off on our adventure to a park that no one had ever heard of before. Rio Villa Nature Trail is at the end of the end of a road along Wallisville Road west of the San Jacinto River. Feeling lost for a while we ventured north into a quirky Rio Villa subdivision that had been badly damaged during Harvey. Trash and household items still hung 25 feet up in the trees. Sand bars were everywhere where there had never been sand bars. The birds seemed unaware of the destruction. Osprey, egrets, herons, yellow-legs were all busy feeding and flying. We reached the end of the road which was truly the end of the road as it abruptly met the river. There was a small parking lot and signs warning of hogs in the park. We set off down the trail and to the boat launch and viewing deck. It was beautiful! Yellow-rumped Warblers, robins, phoebes and more were busy along the trails that still showed heavy signs of the storm. Brown Pelicans, terns, gulls, cormorants and more were busy along the river. This is a great little Precinct 2 park with nice trails and access to the river.

From Rio Villa we headed for a stop for Laredo Tacos at a Stripes gas station. The bus smelled delicious as we exited the parking lot on the highly industrial Sheldon Road. We were off to Sheldon Lake State Park. We arrived to empty buildings due to flooding and had the park to ourselves. There were plenty of Yellow-rumped Warblers around but we soon saw gallinules, coots, Red-tailed Hawks, Crested Caracaras and much more. We hiked the trails past the ponds and enjoyed great views of Gray Catbirds and finally arrived at the tower. The elevator was out of service but the group took to the stairs immediately. It was easy going up and a bit scary coming down. We lunched at the picnic area and watched as a Pine Warbler attacked a bright green grasshopper (see photo below) before a mockingbird stole the prize.

After a lovely lunch we set off again in search of Bald Eagles. A wrong turn took us to a very sad scene of Harvey destruction along the tributary leading south from Lake Houston. Stray dogs and sand were everywhere. It was a sad and shocking scene. Finally, we got back on track and headed west although some joked that we must be almost to Beaumont. After navigating to I-10 we were on Normandy and at the eagle nest. We carefully maneuvered a storm damaged Fuddruckers parking lot on the bus and then dashed across the 4 lanes of traffic with no injuries. At first all that was visible was the head of the female at the rim of the nest. Then we saw her mate preening on a snag nearby (see photo above). It was a great treat for all! We watched for a few minutes and then took our leave. Out of nowhere, a homeless man stepped into traffic, stopped all the cars and motioned us to cross the street. He then headed south in a lane of traffic with his cart. I hope he knows we appreciated his help.

What a great day of adventure!! Join us on a bus trip! Great snacks! Great new friends! Great birds!