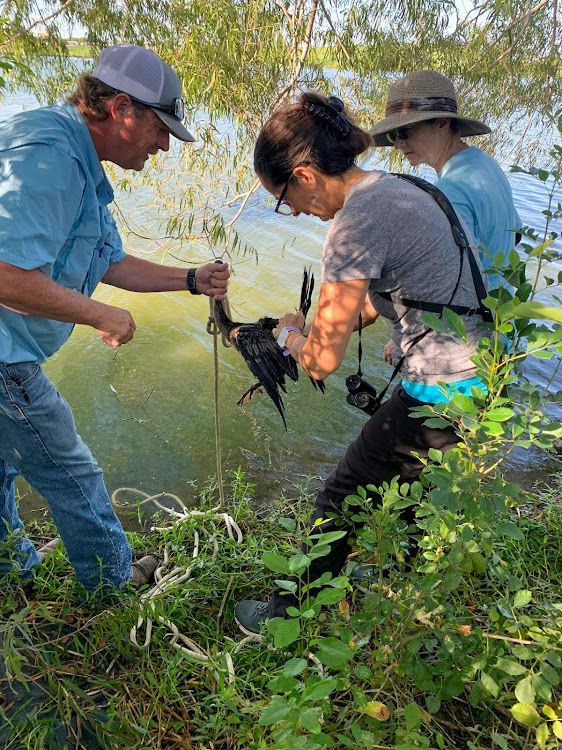 Monday, August 30, 2021 was our monthly survey at Fiorenza Park. We saw very few passerines but hundreds of cormorants on nests and lots of water birds including the ol’ pelican with one wing who has been there for years. I was wondering about birds blown over by the hurricane before we started and we did get great looks at a Magnificent Frigatebird soaring with two Mississippi Kites.

The big event of the morning was finding a young Anhinga tangled in fishing line in a willow. He was pretty far from shore and our only first option was to wade into the not so safe water to try and reach him. I called Precinct 3 and thankfully they had a parks person nearby who arrived within 10 minutes. He only had a rope and a knife. I was very doubtful about it working but the Anhinga ended up spearing the rope with its bill and we pulled him and branches towards us until we could grab him. After untangling him we had to cut the rope off his lower bill. Talk about a sharp beak!!! Wow.

After I checked him over and didn’t feel anything broken he was able to swim away tired but happy. We picked up more fishing line as we birded and deposited it in the receptacles they installed after we rescued the Great Blue Heron a few years ago.

The need for fishing line education is never ending. My group of birders were awesome. We stuck together and stayed with the Anhinga until all was well despite the heat.

See the attached album for all the photos.