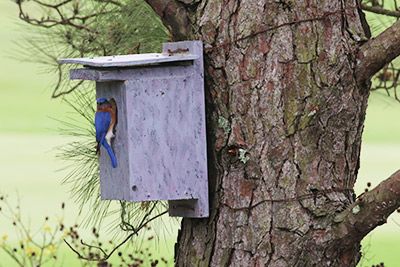 From comments that I have received, many of us are paying more attention to the birds in our backyards because of travel restrictions due to COVID-19.  There have been four species in particular that I have focused on as they visit my backyard.  These are the Fish Crow, Brown-headed Nuthatch, Carolina Chickadee, and the Eastern Bluebird.  We now live in Humble where the habitat is open park-like spaces with numerous lobolly pines, yaupons, and southern wax myrtles.  They're set among live oaks, southern magnolias, a smattering of other plants, and the ubiquitous crape myrtle.  Fortunately, the four species of birds mentioned above seem to be doing well here.

In March, I noticed a pair of Eastern Bluebirds investigating an old Downy Woodpecker cavity in a loblolly pine about 30 feet from our house.  I was surprised that both the male and the female could enter the small hole with ease.  I thought that perhaps the cavity might be too small for them to successfully nest.  We humans often remove dead or dying trees and limbs that are nesting habitat for many species of woodpeckers.  When we do so, we're also depriving nesting sites for bluebirds, chickadees, screech-owls, wood ducks and many others who appropriate abandoned woodpecker holes for their nests.

Shortly afterward, I noticed a pair of chickadees competing with the bluebirds for access to the woodpecker cavity.  To help them out, I built a bluebird house and installed it on another loblolly pine a few feet from the tree with the contested cavity.  Within a couple of days, the bluebirds were inspecting the nest box.  But they were not immediately sold on it since they continued to visit the woodpecker cavity.  Upon being evicted by the pair of chickadees, the bluebirds gladly took up residence in the nest box.

The pair of bluebirds visited the box daily for regular inspections but would leave after a short time.  If I went outside to try to get close enough for a good photo, they would immediately fly away.  I was a bit surprised that they did not immediately move in.  I'd observed Eastern Bluebirds along nest box trails created for them.  The bluebirds seemed to readily accept boxes and were not concerned about people being around as long as they (me) did not get too close.

To soothe the bluebirds in my yard, I bought one of their favorite foods—meal worms.  After having placed the meal worms several times on top of the brick fence in the backyard—less than 10 feet from the nest box tree and in full view from the box where they sometimes perched—not once have I seen them hop down to gobble up the tasty treats.

However, I did learn that our Northern Mockingbirds and Fish Crows also love meal worms!  Once I watched a mockingbird stuff itself with meal worms.  The bird ate them the way we go through a whole bag of popcorn while engrossed in a tense moment of a movie.

The bluebirds did eventually take up residence and we see them regularly, but they are still quite skittish and will not allow me to get close for a good photograph.  We have watched bluebird activity entering and exiting the nest box and it appears that they have recently been bringing food into the nest.  Once I saw the male leave with a fecal sac.  I was surprised that this pair has nested so late.  We have not noticed any bluebird chicks yet.  However, one day we had one chickadee fledgling in the yard under some shrubs.  The parents were above it in a tree and calling to it.  The chick nestled into the soil and almost disappeared!  I was able to get a few good images.

So, if you have Eastern Bluebirds in your neighborhood, think about helping them out.  A nest box is one way.  But you could also plant native plants that flower and fruit.  Bluebirds feed quite a lot on insects, especially when nesting.  In the fall they supplement their diets with berries and fruit from our native trees and shrubs.