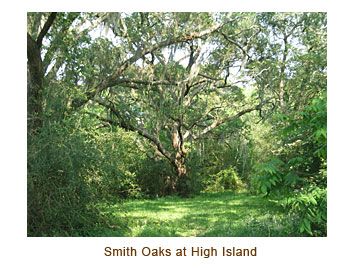 Houston Audubon meets its mission of promoting birds and conservation of their habitat primarily by owning and managing bird sanctuaries. Its first land holding was a bequest in 1975 of 17.53 acres on Rummel Creek in west Houston that became the Edith L. Moore Nature Sanctuary and home to HAS administrative offices and early education programs. A land acquisition program began in 1987 with the purchase of land on the Bolivar Peninsula that established the now internationally famous High Island sanctuaries. Major additions to those sanctuaries followed through the High Island Initiative, an innovative partnership between Houston Audubon, National Fish & Wildlife Service (NFWS), Phillips Petroleum Company, Amoco Productions Company, The Nature Conservancy, Texas Parks & Wildlife Department (TPWD), and the US Fish & Wildlife Service (USFWS). By the year 2000, Houston Audubon had acquired nearly 1,700 acres of sanctuary lands through further purchases, donations, and mitigation actions. We now own 4,121 acres spread out over 17 sanctuaries in five counties.