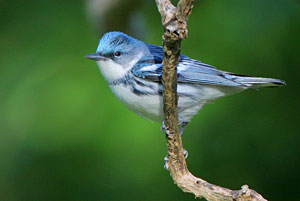 Many species of birds, called neotropical migrants, nest in North America and spend the winter in Latin America. Twice each year these birds migrate the long distances between wintering grounds and spring nesting locations. Each spring millions of birds that wintered in Central and South America are driven north by the urge to establish breeding territories and select mates. They first push north to the Yucatan Peninsula and the adjacent Mexican coast.

Beginning in early March, migrants reach the tip of the peninsula and if the weather conditions are favorable, just after sunset, migrants leave Mexico and head north across the Gulf of Mexico. The trip across the Gulf is 600 miles and with good weather takes about 18 hours. Arriving on the Texas coast midday, some of these birds stop on the coast; but most will fly inland until nightfall.

During the spring migration period from early March to mid May conditions occasionally exist where strong, turbulent north winds and rain trigger a phenomenon called a "fallout." This usually happens when a strong, fast-moving cold front crosses the Texas coast and moves into the Gulf of Mexico during the middle of the day. The wind and rain slows the migrating birds down causing them to rapidly use up their stored energy reserves. Thousands of extremely tired migrants are forced to seek shelter and food as soon as they reach the coast. At these times, good-quality habitat along the coast is vitally important to the survival of tens and thousands of birds.

During a typical fallout, Houston Audubon sanctuaries are used by the majority of species of the neotropical migrants that nest in the forests of eastern North America. Often, more individual species are found here than could be found in several thousand acres of prime Appalachian forests. For birdwatchers, fallouts can provide an exceptional birdwatching experience, as the birds are very tired and hungry and seem oblivious of humans. But for the birds it is an extremely stressful time, and birders must remember that it is important not to disturb the birds as they need to recuperate and continue their journey north.