History of the Houston Audubon Logo 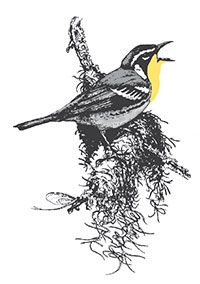 The Yellow-throated Warbler was chosen in 1988 to be Houston Audubon's insignia bird. Ted Eubanks, who was serving as President, wrote in his introduction to the logo, "In the past the Sycamore Warbler, now known as the Yellow-throated Warbler, commonly nested in the broad expanses of cypress swamp that lined our bayous and bays. These swamps are now gone, victims of uncontrolled logging and 'reclamation.' The only significant cypress swamp that remains in our area, Lake Charlotte, will be destroyed by the construction of the Wallisville Reservoir (and with it the Sycamore Warblers that still nest there)."

The proposed Wallisville Dam on the Trinity River was Houston Audubon's first high-profile advocacy position. We joined a lawsuit in 1971 to stop the dam's construction. An injunction stopped construction of the project in 1973, but litigation continued for many years until the injunction was lifted in 1987. It appeared the battle was lost, but then a magnificent pair of Bald Eagles was discovered nesting in the heart of the project area. As a result, a much smaller reservoir was built, and thousands of acres that had been condemned were designated a preserve, protecting habitat for the Yellow-throated Warbler and many other species.

Artist Linda Feltner created the drawing for the 1988 logo. The present logo was adopted in 2009. The Yellow-throated Warbler continues to be a very appropriate symbol for our mission.

The logo was decorated to celebrate the 50th anniversary year in 2019 by Zineera Seth. Notice the rounded corners. 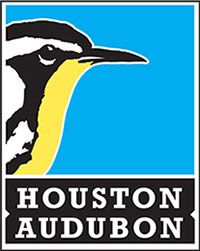 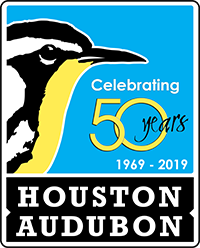